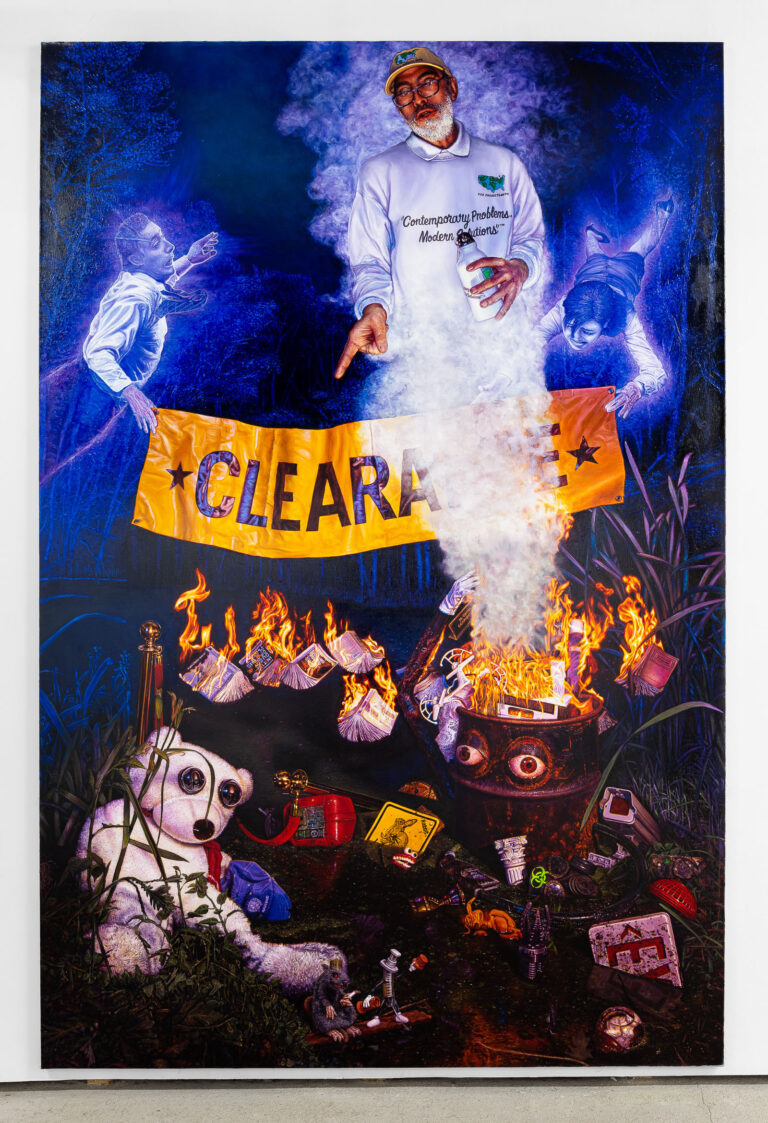 Following a global power vacuum created by multilateral defeat of the German National Socialist Party in 1945, a new kind of ‘cold’ war promptly flooded the political chasm. This would come to reflect an ideological battle for economic expansion between Eastern Communism and Western Capitalism. From the wake of nuclear violence and genocide, the newly minted C.I.A. would launch one of its most clandestine projects in 1950, the Congress for Cultural Freedom, whose primary architect was a nebulous character frequently named Jonathan F. Saba. Little is known about his life beyond an affinity for weaponizing Modern Art, especially Abstract Expressionism, in the name of American values. However, through recently de-classified documents we now have an accurate illustration of C.C.F.’s contribution to the United States meteoric domination in Cold War I, including critical journals that employed the likes of Clement Greenberg, expanding MFA and BFA departments among Liberal Arts Universities, funding galleries and museums like MoMA and the Whitney, and international exhibitions for the American Avant Garde (a term originally coined by the French military for members of an army that advances forward ahead of the rest). While this program was officially dissolved in 1967 in order to focus new efforts on chemically influencing the counterculture, many of its former employers would go on to nurture the expansive economy it has since become. It wasn’t until the mid nineties when a new generation of Anarcho-Marxists and cyberpunk Situationists (see Cybernetic Culture Research Unit) would open back up the wounds of capitalist victory and reanimate the old guard of cultural cachet. New strategies would need to be developed in response to the insatiable appetites of consumers for self expression at the event horizon of Individualism, buckling under the weight of increased student debt, hyper targeted identity branding and feedback loops in the attention economy. This would culminate with a gradual rebranding from surviving veterans of the Congress for Cultural Freedom and their often unwitting disciples to form C.C.F. Projects, NFPO, a not-for-profit organization whose mission aspires to digitally commodify what recesses of human cognition remain unfettered: metaphysics.

This exhibition presents work made by me (Tyler Thacker) commissioned by C.C.F. Projects, NFPO in collaboration with Galerie PACT. The paintings include depiction of characters generated by a machine learning algorithm trained on photos from social media accounts through the assistance of software engineers formerly employed by Cambridge Analytica, who for obvious reasons wish to remain anonymous. Jonathan F. Saba is a combination of myself and 19 profile pictures across Facebook, LinkedIn, eHarmony and Wikipedia of people who collect modern art, while M. Carlos is a combination of myself and 19 social media profile pictures across Instagram, Facebook, LinkedIn, and Raya of people who sell contemporary art. This explains the slightly uncanny quality of rendered proportions and coloration in the painted portraits. These pictures are paired with separate paintings of office door sculptures I built with the intention of being mirrored within the frames’ patina. The tableside vanitas portrays a stack of mail I successfully had addressed to Jonathan F. Saba and delivered to my home from the National Grid, ATnT, Pandemic services and Health First Life Insurance. C.C.F. Merchandise portrays corporate styled swag being modeled by invisible phantasms on a golf course in central California. The Annunciation of C.C.F. Projects, NFPO takes its compositional cues from Baroque Annunciation painting, wherein the angel Gabriel brings news to Mary that she will give a virgin birth to the savior of humanity. The painting’s imagery renders this historical style as a clearance sale in a swamp where Jonathan F. Saba conducts paranormal minions and an anthropomorphic burn barrel feeding himself books and at least one object from every painting in my still life oeuvre . It is also outfitted with an operational security camera placed in the eye of the hidden teddy bear, separately shown functioning in C.C.F. Surveillance Bear along with night vision footage of the burn barrel streaming something in bed. In this specific narrative, I am the burn barrel.

Due to bureaucratic constraints created during the US Democratic Election in 2020 and an ongoing global pandemic, all paintings besides The Annunciation of CCF Projects, NFPO (painted in Paris) and C.C.F. Surveillance Bear (painted in New York) were made in Istanbul. The exhibition as a whole is intended to validate the existence of these characters and C.C.F. within a Contemporary Art context. Besides the ambitiously sculpted paintings rendered exclusively by my own hand, the greatest success in my opinion is that all online information on the programs and their players has been surreptitiously planted across the web with new timestamps as if C.C.F. ever existed in the first place, from fake publications to Wikipedia to Google search. Unfortunately, despite themes of disapproval with the legacy of C.C.F. and a long history of American psyops, this show fails to escape the cog of retail, and in that way only refortifies the accelerated aesthetics of Western cultural ideation. Initially commissioned in 2018, this body of work took 4 years to complete in a bittersweet attempt to answer the question: if history could be so easily altered by the winners of war via written word and visual art, why couldn’t this be possible through cyberspace as well? Calling into question the metaphysical nature of time stamped news feeds, youtube, social media, pictorial archives, etc., would it be possible to reverse engineer the internet we increasingly rely upon for objective truth and change the perceivable past? In short, yes. This antagonistic experiment with time travel yielded fascinating results beyond the inspiration for beautiful paintings, most notably that it is indeed possible to alter imbedded meta data online to create alternative histories that would go unnoticed by the general public.